Don’t risk a pushchair that isn’t safe and comfy for your baby. Our Best Buys are independently tested and go through rigorous safety checks. Compare the best pushchairs that came out on top. 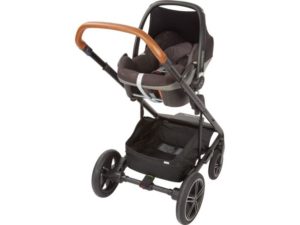 Like its predecessor, the Mixx, the Mixx Next is a Best Buy. It gets brilliant scores across the board with its convenient design and excellent manoeuvrability making it one of our top picks.

The Nuna Mixx Next is a from-birth pushchair suitable for use until your child weighs 22kg, which is around four or five years old.

The seat unit, which is reversible, reclines back more than 150 degrees, making it suitable for newborns.

This pushchair can be converted to a travel system by replacing the seat unit with the Nuna Mixx Next Carrycot or a car seat. The adaptor it comes with can be used with Nuna car seats as well as car seats from brands such as Maxi Cosi and Cybex.

The Mixx Next comes with a 4.5kg shopping basket, extendable UPF 50+ hood and padded seat liner which can be removed to reveal a mesh back for keeping your baby cooler in the summer months.

Our parent testers and pushchair experts take each pushchair around a specially designed assault course to find out how it copes on different surfaces such as uneven grass, gravel and wood chips.

The Mixx Next breezed through our test course, coping impressively, even on rougher terrain, with all-wheel suspension helping to protect from jolts and bumps. Our testers found it smooth and easy to manoeuvre, handling obstacles with ease and turning well in tight corners. 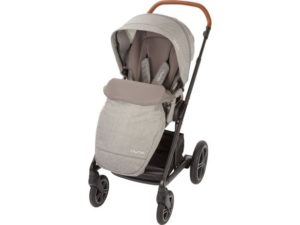 Is it straightforward to use?

The brake pedal holds well and has handy green and red coloured indicators so you can easily check whether it’s engaged.

The handlebar can be easily adjusted from 106cm to 115cm to suit a range of heights, with most testers finding it comfortable to grip.

The seat is well-padded to keep your little one comfortable. It has a ventilated mesh back to keep them cool in hot weather, which you can cover with a padded liner in winter months.

Getting your child into the seat is straightforward, although the shoulder and waist straps split, making it a little fiddly to fasten the buckle. The straps are easy to adjust as there’s no need to feed them through the backrest like on some pushchairs.

The seat can be easily reclined to a choice of five positions using the one-handed lever at the top of the backrest. The leg rest, which moves between two different positions, is quite stiff to adjust and requires two hands.

Removing and replacing the carrycot is an easy process, as you don’t need any adaptors so it can be clicked straight on.

Attaching and removing the car seat and car seat adaptors is also straightforward, although it’s easy to confuse the release button with the button that adjusts the angle of the adaptors.

Is it easy to fold, transport and store? 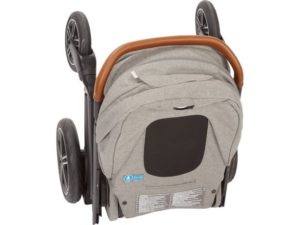 This pushchair is fairly easy to fold with two hands. The manufacturer states that it has an automatic locking clip, but this does pivot out of the way, so you’ll need to ensure it’s in the up position for it to engage and lock automatically. It’s quite stiff to unfold and requires a bit of force, as the seat can catch on the handle.

The folded package fits under the parcel shelf of a mid-sized family car boot, leaving space for other items. At 13.1kg, it’s quite heavy to lift so you won’t want to carry it too far.

This pushchair is quite bulky when folded so it isn’t the best option for those who regularly travel by public transport.

Is it safe and sturdy?

Yes, the model we tested passed all safety and structural tests and seems sturdy.

Is there anything else I should know?

The storage basket has high walls, a sturdy base and provides plenty of space for all your baby essentials. It’s easy to access and has a central wall that can be lowered for larger items or raised to split into two compartments. There’s also a handy zipped pocket on the back.

The hood, which is made from UPF 50+ sun-protection material, has an extendable zip-out section to increase coverage. It has a magnetic window so you can easily check on your little one while you’re out and about. However, it’s quite noisy and jerky to adjust, which could wake your child if they’re sleeping.

The covers are easy to remove for cleaning and can be put straight in the washing machine.

You can position the seat unit either forward-facing or parent-facing. It’s simple to remove the seat and it clicks back into place easily.

Should I buy it?

Yes. It’s one of the highest scoring pushchairs we’ve tested.