From traditional gas to more modern induction, see our Best Buy hobs and find the ideal hob for your kitchen with our expert guide

A great hob will be quick to heat up when you’re in a hurry but also be able to simmer very gently. The best hobs will spread heat evenly to help you prepare a perfect pancake. While gas hobs are still very popular, they aren’t easy to keep clean. Flat induction hobs make removing cooking splashes and spills much easier.

Read on for our expert buying advice and Best Buy recommendations, which are based on our rigorous and independent tests.

With hobs, it’s more than just deciding between electric or gas. Here’s a brief overview of the three main types of hob. Visit our individual buying guides on ceramic, induction and gas hobs for more in-depth information.

Ceramic hobs run on electric and have a smooth, easy-to-clean surface. They’re easy to use but are slower to warm up and cool down than gas or induction hobs. While individual hobs vary, heat distribution across the bottom of pans often isn’t as good as when cooking on gas. Read our ceramic hob buying guide.

Gas hobs are easy to control and give instant heat. They’re not as quick as induction hobs at heating up big panfuls, but they’re usually better at distributing heat evenly across the base of a pan. They tend to be good at simmering, too. Gas-on-glass hobs have gas burners mounted on top of ceramic glass, so as well as looking more stylish than other gas hobs they’re also easier to clean.  Read our gas hob buying guide. Induction hobs Induction hobs create a magnetic field between the induction element in the hob and the pan. This means that only the pan heats up, rather than the cooking surface.

are quicker than other types of hob and more efficient to run because there’s no heat loss from the hob surface into the air. Before you buy, you should check your pots and pans work on an induction hob, as you may need to invest in a new set.

Best hob features to look for

From special burners for woks through to child-safety features, here are some things to think about depending on how you want to use your hob.

Wok burners Some hobs have a large high-powered gas wok burner that provides intense, rapid heat. These are designed for stir-fry cooking. Some induction hobs also have a dedicated wok zone, with a curved indentation in the hob’s surface.

Dual zones On electric hobs, this allows you to use an inner zone within the main ring, which saves energy when cooking with smaller pans.

Pans for induction hobs Induction hobs require pans that contain iron. Some, but not all, stainless steel pans will work. If a magnet sticks to your pots and pans, they’ll work on an induction hob.

Child-safety lock Most electric ceramic and induction hobs have safety locks to stop the controls being adjusted by inquisitive children.

Hob timers Many induction hobs have a timer for programming zones to switch off automatically when you want them to stop cooking.

How much should I spend to get a good hob?

You can pick up a basic gas hob for less than £100 if you go for an own-brand model. Gas-on-glass hobs are a little pricier, starting at around £120.

You can pay up to £1,000 for a high-end, five-zone gas hob from an upmarket brand. Induction hobs have plummeted in price over the past few years, and a cheap four-zone model can cost less than £200.

We’ve even found Best Buy induction hobs for less than £250. At the other end of the scale, a top-of-the-range number could set you back £2,000.

Electric ceramic hobs often cost less than £200. As with gas and induction hobs, larger, pricier models are available. Use the filters on our hob reviews to find one that meets your needs and budget.

What size hob do I need?

Hobs come in various shapes and sizes. Most have four cooking zones, but there are plenty of five-zone hobs to choose from. They tend to be between 70cm and 90cm wide, and 51cm or 52cm front to back, which means that they’ll fit onto standard-sized kitchen counters.

Most ceramic, gas and induction hobs are about 60cm wide. Hobs that are slightly wider should still fit a standard 60cm gap as they’re designed to overlap the worktop. The size of hobs depends on the size of the burners or hob rings, which will vary from hob to hob.

Larger hobs have five cooking zones, and gas hobs often have a central wok burner. This is a high-powered burner used for stir-frying or rapid boiling. Five-zone hobs range in width, but are generally no more than 90cm wide. Having five zones doesn’t necessarily mean you’ll be able to fit five pots and pans comfortably on the hob, but the extra hob zone does give you more space than a four-zone hob.

One, two and three-zone hobs

You don’t have to be limited by traditional-sized hobs. Single-zone, two-zone and three-zone hobs are all available and can be built into a countertop.

Which hob type is the most energy efficient?

While the energy your hob uses in a year is a drop in the ocean compared with heating your home and water heating, it’s still worth bearing in mind how much energy a hob uses and where this energy comes from. Whether you’ve got the zone on full power for a few minutes or are simmering gently for a while, an induction hob uses energy more efficiently than either a gas hob or electric ceramic hob.

Gas hobs are the least energy efficient of the three main hob types. A significant amount of heat is lost to heating up your kitchen, rather than your food.

However, because gas is cheaper, you may save a few pounds a year with a gas hob over an electric hob. In terms of sustainability, induction and ceramic hobs have the possibility to run on renewables (depending on your electricity supplier), while this is not the case for gas hobs.

Is it possible to repair a hob? 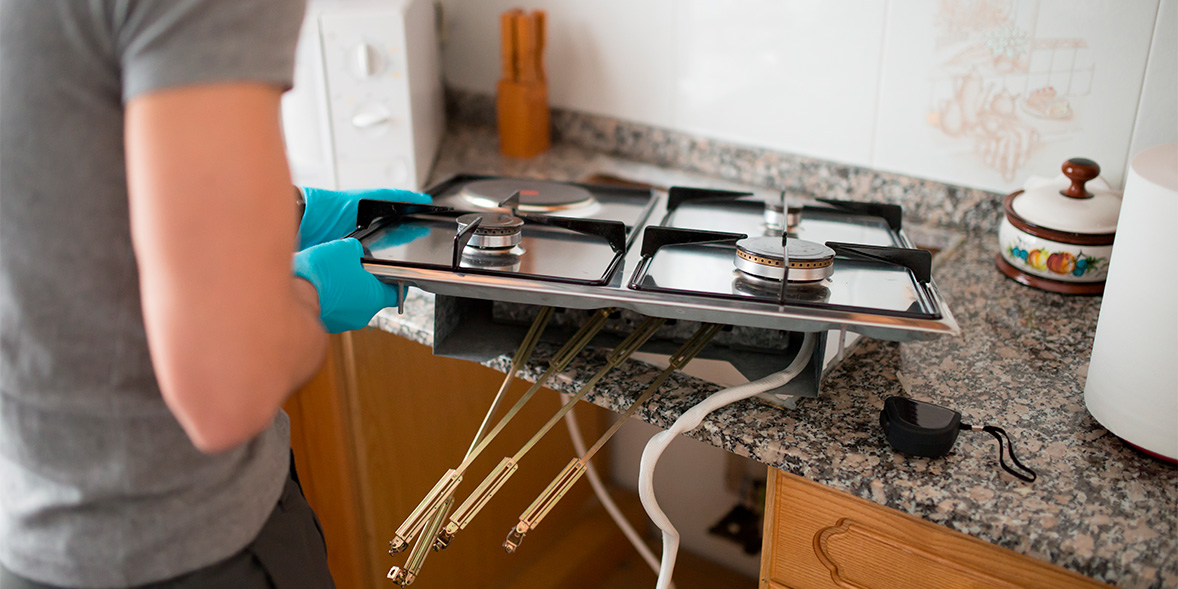 Most faults on a hob – whether gas or electric – will require the attention of an engineer. Don’t be tempted to dismantle parts unless you’re qualified to do so, as this could be dangerous. Which? Trusted Traders will help locate a local company that can assess what’s wrong and maybe fix it on the spot.  Hobs are usually guaranteed for two years by larger retailers such as Currys and John Lewis, although some offer more.

Sometimes a longer guarantee is offered for parts, and a shorter one for labour. If your hob is still under guarantee when it breaks down, your first port of call should be the retailer who should fix it for free or offer you a replacement product.

Hobs aren’t yet covered by the new right to repair law that came in recently for washing machines, fridges and some other appliances. This law obliges manufacturers to have spare parts available for up to 10 years after discontinuation of the appliance. Which? is working to encourage government to extend this law more widely to other appliances, such as hobs. Common problems with hobs include one of the zones stopping working, or the ignition on a gas hob giving up the ghost

Should I buy an ex-display, refurbished or second-hand hob?

Ex-display can be a great option. The hob is unused, and any differences to a new hob should be visual only. If you can see it in person before you buy do so, otherwise ask to view images. You still have the right to return the hob if the description doesn’t fit, but it’s better to avoid that hassle.

Refurbished models are usually those that have been returned by the purchaser, as unwanted or faulty. Again, these should be a safe bet, and you should get a full guarantee with them. Buying second-hand can be cheaper and more environmentally friendly than buying new, but there are several things to bear in mind. Buying from a reputable business rather than a private individual is better, as you will be covered by various quality and safety rights.

If you buy from a private individual, check the hob hasn’t been subject to a recall: see Electrical Safety First’s product recall list. If you do take the private sale route – via Gumtree or Amazon marketplace for example – try to get evidence that the hob has been gas or electrical safety tested.

If it can be plugged in using a 13 amp connection it should have a a PAT test (an electrical safety test for portable appliances), too. Most gas hobs can be plugged in like this (they need electric for the ignition), but the bulk of electric hobs require hardwiring. Also ask about a guarantee.

If you can, get the manual from the seller.

Otherwise, look online for a free download. Whichever route you take, it’s important to get your hob installed by a professional: a Gas Safe engineer or a professional electrician. If it’s second hand, tell them you want it checked over at the same time.

I’ve moved house and a hob is already installed. Can I just start using it?

People often leave their hob behind when they move house. The inventory agreed during the sale means you will know which appliances are included.

If the hob runs on gas, the vendors should supply a gas safety certificate. If they don’t, or any check is from more than a year ago, you should get a Gas Safe registered engineer to carry out a safety check, ideally before you move in. For electric hobs, unless you are able to get evidence of correct installation and a safety certificate, you should get an engineer in to give it the once-over.

How should I dispose of or recycle my old hob? According to Recycle Now, about two-thirds of unwanted electrical goods go to landfill.

This not only creates a problem for the future, but prevents valuable raw materials, such as iron, from being re-used. There are a number of options for recycling your hob. If you’re getting a new hob delivered, it’s usually possible to arrange for the old one to be taken away for recycling at the same time. Currys PC World and John Lewis offer this service for a small charge (£15 – £20).

They both state appliances will be recycled responsibly.  Another route is to take your hob to the local authority recycling centre. Recycle Now has a tool to locate your nearest recycling centre that accepts electricals. Some stores also take old appliances for recycling.

Alternatively, your local council will pick up for a fee. If you’re simply upgrading or redesigning your kitchen and there’s nothing wrong with your hob, you could give it to a charity (some offer collection) or sell it privately.  Find out more about How to recycle electrical items.

The shop you buy your hob from is likely to offer its own installation and disposal services, so check this when you make your purchase.