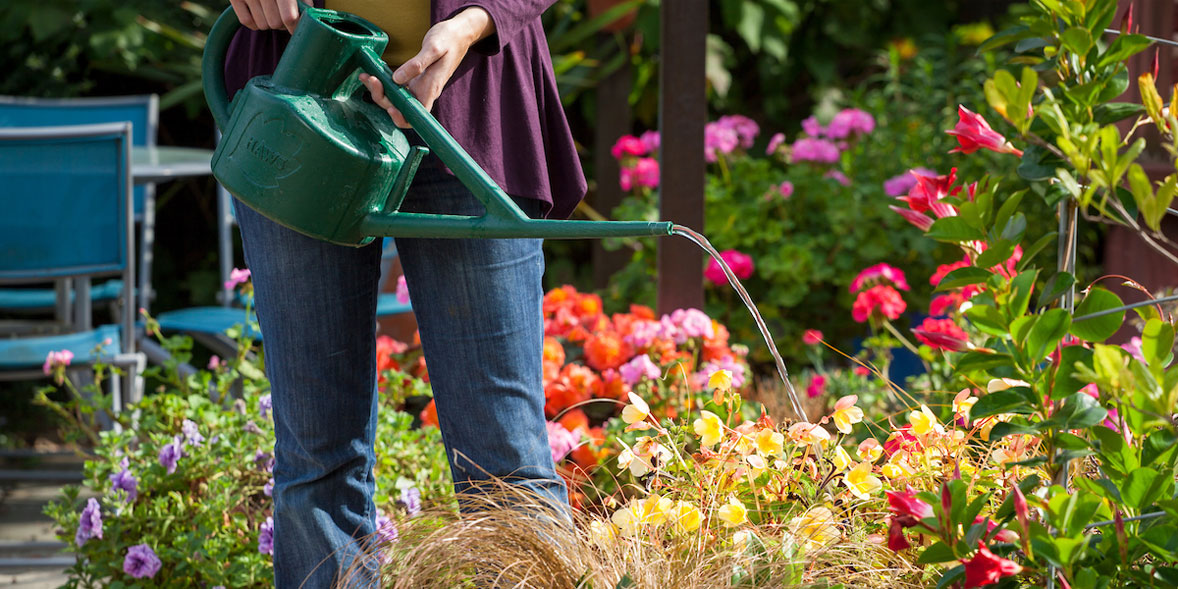 Liquid feeds are fertilisers that are applied as you water your plants. They include both concentrated liquids you dilute in water and granules you dissolve. You can use them for pots and borders to give your plants an instant pick-me-up. If you prefer to add controlled-release fertiliser to your pots, you may still use a liquid feed at the end of the summer as the controlled-release fertiliser runs out. Liquid feeds usually have a different balance of nutrients from tomato feeds – liquid feeds typically contain more nitrogen to fuel green, leafy growth, while tomato feeds have higher concentrations of potassium to produce fruit. That said, there is enough potassium in a liquid feed to keep pots of bedding plants flowering happily all summer.

Is seaweed a good plant food?

Many gardeners, especially those who practice organic methods, swear by seaweed. In its natural form, it can be used to add organic matter to soil. It also contains small amounts of plant nutrients, including trace micronutrients that might be lacking in conventional feeds, as well as plant enzymes and plant hormones, such as cytokinins, auxins and gibberellins, These are said to aid the uptake of water, root growth and the production of chlorophyll for photosynthesis.  This is perhaps why there is confusion over whether products containing seaweed extracts are feeds or stimulants.

Some conventional feeds incorporate seaweed, but the two seaweed products we included in our trials, Maxicrop Original and Westland Liquid Seaweed, are both described as stimulants. Neither give an NPK rating and the makers talk more in terms of their ability to boost root growth, ensuring plants can take up nutrients. In our trial, we saw there was some benefit to using a seaweed stimulant when compared with the pots that we didn’t feed, but the advantage was minimal.  For plants that need high levels of nutrients, such as pelargoniums, it’s best to use a conventional feed, which you can supplement with a seaweed stimulant if you want to.

How we test liquid feeds

In May, we planted pelargonium ‘Horizon Red’ in 10L pots filled with a Best Buy peat-free compost for patio pots. Each pot contained three plants and we grew three pots of plants for each product.  We decided to trial the feeds with pelargoniums as they’re very hungry plants that need plenty of fertiliser to grow well. They also clearly show nutrient deficiencies in their leaves, and there are marked differences in size and flowering depending on whether they’re getting enough goodness.

Lack of the three major nutrients – nitrogen, phosphorus and potassium (NPK) – can all be diagnosed by leaf colour changes, and so can deficiencies of most of the minor and trace nutrients. Nitrogen shortage shows as yellowing or a red or pink tinge at the leaf edges. Insufficient phosphorus and potassium is seen in darker green leaves, which then develop pink or purple patches or go brown all over.  The feeds we trialled came in various forms – most were concentrated liquids, but two were soluble granules. Miracle-Gro Liquafeed Concentrated Universal Liquid Plant Feed came in a bottle that attached to its own spray head.

The concentrate was automatically mixed into the stream of water coming from the hose. Ecofective Organic Pour and Feed was a ready-to-use product that didn’t have to be mixed before use.  We drew up a schedule of when to apply the feeds. For each product, we carefully followed the instructions for the dosage and how frequently it should be applied.

If the instructions suggested a range of frequency – for example, every seven to 10 days – we chose the lower figure. We started to use the products once the pelargoniums had been in their 10L pots for four weeks, as this is when the base feed in the peat-free compost they were growing in was used up by. We continued to feed and assess our plants until early October.

We assessed the plants for size, how well they flowered and their leaf colour every two weeks, and recorded every deadhead were moved. At the end of the trial in early October, we cut the plants at the base and weighed each one to get an accurate measurement of size.