Electric scooters: everything you need to know
Learn how to ride e-scooters legally and what we discovered about their safety in our tests. We also reveal how much electric scooters cost and what you’ll spend charging them. 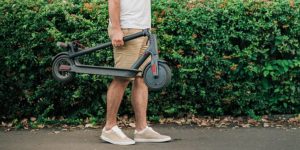 Electric scooters are rising in popularity and there are hire schemes available, but privately owned e-scooters are not legal to use on public roads, cycle lanes or pavements and current laws in the UK restrict where e-scooter owners can ride.

This hasn’t stopped many breaking the law and there have been a number of accidents due to electric scooters.  Read on to find out everything you need to know about the legality of electric scooters, as well as reviews of e-scooters, potential safety issues to look for and a breakdown of running costs.

Are electric scooters legal? You can legally use an electric scooter on private land, as long as you have permission from the land owner.  The UK government is also running trials of electric scooters in cities and areas around the country, including Cambridge, Liverpool and Nottingham, to see how members of the public adapt to the new method of transport.

You can find a full list of electric scooter trials on Gov.uk.  It’s illegal to use your own electric scooter on public roads and pavements. If you’re caught, you could face a fine and penalty points on your driver’s licence, if you have one. Your e-scooter could also be impounded. Watch our video below to find out more about the legal situation with e-scooters. 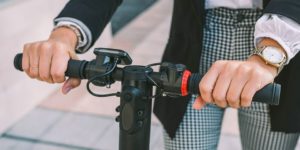 How far can electric scooters go?

It all depends on which brand of e-scooter you’re using, the size of the battery and the amount of charge it has left. You’ll also need to consider the type of routes you go on. If you’re riding an electric scooter on flat ground, it will last longer than if you were riding up lots of hills.

Our own expert analysis shows that Halfords is one of the most popular UK retailers that currently stocks electric scooters. With that in mind, let’s look at the claimed ranges for each of its listed models:

*Based on a total of eight adult electric scooters.

How to use e-scooters safely 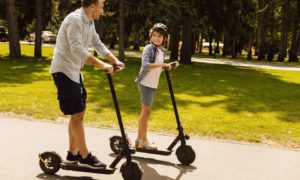 Understandably, many are concerned about the safety of e-scooters to pedestrians and other road users on public roads, either from illegal use or e-scooter hire trials.

This is something that the government will be reviewing as it makes a decision about making e-scooters legal.  Additionally, there are risks to riders themselves and keeping safe is paramount. Here’s a number of things you should bear in mind when riding an electric scooter:

Check the tyres – squeeze your tyres firmly with your thumb and forefinger. If a tyre feels squashy, it’s underinflated – don’t ride the scooter until its tyres are pumped up, as it won’t be stable and will be much more likely to skid out from under you while turning a corner.

Make sure the bolts on the stem are tight – the wheels and handlebar must stay in alignment while you’re riding. We tested several scooters with loose bolts, which led to the handlebars coming out of alignment with the wheel. This is a serious safety risk. To check the bolts, stand in front of the scooter and trap the front wheel between your feet, holding the wheel tightly in position. Then hold the handlebars and twist firmly in either direction. If the wheel and handlebars are still in alignment after this, it’s safe to ride.

Grab a helmet – it’s not a legal requirement, but wearing a helmet is a wise move. Expect to spend between £10 and £30. Also consider wearing light-coloured or fluorescent clothing to make it easier for you to be seen.

Watch your ankles – electric scooters are extremely heavy and can weigh as much 24kg. This means that even when they’re travelling at very low speeds, for example when you’ve just hopped off one, they’re still moving with quite a lot of force behind them. A few of our researchers found that an electric scooter tapping against your ankles can be very painful and even causing bruising or cuts.

Watch out for potholes and uneven ground – electric scooters have narrow handlebars and their handling can be a little twitchy. This can make controlling severe jolts quite difficult. Some of the scooters we tested don’t do a very good job of controlling vibrations, so much so that if a severe jolt takes you by surprise your hands could come off the handlebars.

Beware skidding – during our electric scooter test, we completed an emergency stop on each of the 10 scooters. Only two came to a halt without skidding. This means that if you need to stop in an emergency, you should get used to controlling a skid on a scooter.

Be careful on hills – most of the scooters we tested can’t handle even shallow gradients, let alone steep hills. If there’s a big hill ahead, many scooters will trundle to a halt, so be prepared to hop off and push.

No passengers – electric scooters are designed for one person only. It’s not safe to carry a passenger. There isn’t room on the scooter’s standing board for two people, and the addition of an extra person can suddenly shift the balance of the scooter unexpectedly, leading to both passengers falling off.

Don’t hang anything on the handlebars – electric scooters tend to have narrower handlebars and the handling is more sensitive than bikes. Hanging anything from either handlebar is an unnecessary risk and will put even an experienced rider off balance.

Be extra cautious in the rain – not only will rain make braking distances longer and increase the chance of skidding, most of the private electric scooters you can buy aren’t designed for use in the rain. See our electric scooter reviews below to find out which ones will work in the rain. 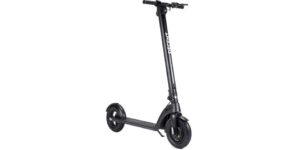 Our verdict: This e-scooter is manoeuvrable and stable, but the brakes are disappointing and it has a tendency to skid. The X7 was one of the lightest e-scooters we tested and relatively easy to fold down and carry. It’s also no slouch over 60 metres, arriving a couple of seconds after the most spritely in our tests.  However, it does struggle a bit on hills (although it wasn’t the worst). It crawled up a 12.5% incline, and where our test hill pitched up to 20%, this scooter faltered.  Its brakes let it down, too. This e-scooter took the longest to stop (7.6 metres) in our emergency-braking test, and it’s very prone to skidding. 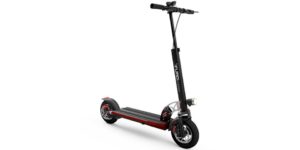 Our verdict: Too fast and also pretty bulky and heavy. Plus the accelerator is too close to the brake. This e-scooter reminds us a bit of Biff’s hoverboard in the 80s blockbuster ‘Back to the Future’. But unlike Biff’s ‘Pitbull’, the Fuze is only IP55 rated, so it won’t work too well on water (see comparison table below for the water-resistant properties of each scooter).  In terms of the test results, this is a pretty decent electric scooter. It handles 12.5% gradients with ease, but despite claims to the contrary, it failed to make it up a 20% gradient.  The brakes are quite good on the face of it, with the scooter stopping in a relatively short distance. But the position of the accelerator directly above the brake isn’t ideal. In an emergency stop situation we can imagine an inexperienced rider grabbing both the accelerator and the brake, which wouldn’t be safe.  It’s also worth noting that the Fuze is not an assisted e-scooter. You don’t need to push off with your leg to get the power to kick in, as you do with all of the other e-scooters we tested.  This electric scooter isn’t particularly easy to manoeuvre. It’s also very heavy, so it gets a poor rating for folding and carrying. For the purposes of our tests we restricted the top speed of this e-scooter to 15.5mph to match the other scooters in our test. We wouldn’t recommend using it at a faster speed. 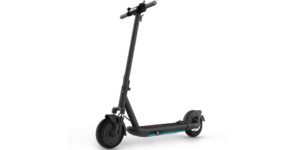 Hill-climb test: Second place overall. It made it up the 12.5% incline, only marginally behind the best on test. It then crawled up the 20% incline and faltered on 25%.

Our verdict: This is a good e-scooter, but it’s also incredibly heavy and the acceleration is jerky. The ride comfort and climbing ability impressed our panel. However, its enormous weight means it’s almost impossible to carry, even short distances.  The sheer amount of power delivered to the wheel can also make the acceleration feel quite jerky, and we experienced a bit of wheelspin.  But despite its weight, this e-scooter is relatively quick and it can also climb: it’s one of only two electric scooters that made it up the 20% incline in our tests, but it stalled on 25%.  Our researchers found that it damped vibrations effectively on tarmac, and it’s a good e-scooter for riding on uneven surfaces.