How to buy the best folding electric bike

A folding electric bike could be the key to releasing you from a stressful commute, or a way to explore further afield in your leisure time.  Just like a normal folding bike, the focus is on a more compact and easily transportable bicycle. These bikes will all fold, at the very least, in half, so they’re perfect if storage is limited at home or you want to transport them in a car or on a train.

You’ll also have a bit of support when you need it from the battery-powered motor unit, which can add power to your pedaling and take the edge off any steep or lengthy hilly sections that might be on your route.

Why buy a folding electric bike and what to spend

Folding bikes are designed to take up less space and be easy to fold down into a smaller package. This makes them a more practical choice if you’re planning on transporting your bike regularly, particularly compared with regular electric bikes, which we’ve found can be very heavy, and on some types the position of the motor can make removing wheels for transportation tricky.

Folding bikes are a popular choice for: Train commuters Cyclists with limited storage space at home Cyclists who regularly transport their bikes in a car or motorhome.

Owning a folding bike can make it easier to enjoy cycling as part of your routine.

And if you have a long or hilly commute, or you want the freedom to go further on leisure rides with a bit of backup just in case, and electric version can give you a boost when you start to tire.

How much do you need to spend for a decent folding electric bike?

Folding electric bikes can cost thousands of pounds, as the combination of folding technology and expensive battery packs really adds up. Prices can vary significantly, though, so it’s worth knowing if you can get away with a cheaper option or not.  We’ve tested bikes from £650 all the way up to £2,900.

The complicating factor for electric bikes is that more money spent might get you a bigger battery and a longer range, but this all adds to the weight of the bike, and makes carrying and transporting it very difficult. The best ones balance the two for a bike that has a decent range, and is light and easy to carry.

Buying a bike that lasts

Our tests have shown that build quality can really vary between bikes. We assess the quality of components and hinges that will be subject to daily wear and tear, and some were really poor, which could mean you have to stump up for a new bike sooner than you’d like.

Check our hitlist of poor-scoring Don’t Buy folding electric bikes to find out which models to avoid.

Folding electric bike features: what you need to know

The heavier the bike, the harder it is to lift and carry, and the more effort it will take to get it up to speed, particularly if the battery has run flat. If you’re in a shop, pick the bike up when it’s unfolded and folded to see if you can physically do it, and to feel how balanced the bike is in the hand.

We test exactly how long each bike’s motor will support you for on flat terrain as well as on hills. Some can manage as far as 45 miles on max before the battery needs a recharge. So it’s worth thinking about:

How far you intend to travel

How hilly your journey typically is (hilly terrain will use up battery more quickly) Manufacturer range claims are hard to compare as each uses different criteria, but our tests are conducted in lab conditions and we control factors such as weight, rolling resistance and air resistance, so you can accurately compare the figures for different bikes against each other.

Try and make sure you get a bike with a removable battery. If the battery is easily removable this can make it easier to transport, as you can remove a lot of the weight on the bike by taking the battery off and carrying it separately.  If the battery is built into the frame and you can’t remove it, then you can’t remove it for storage, charging or necessarily easily replace it. With most lithium-ion batteries only guaranteed for a couple of years, this could limit the life of your bike.

You’ll be folding and unfolding the bike a lot, especially if you’re planning on commuting with it. Make sure the bike is nice and compact when it’s folded, and that you’re comfortable with the folding mechanism. In our reviews, we time how long each bike takes to fold and unfold. We also tell you how compact the bike is when it’s in a folded state, if it’s easy to carry and how balanced it is.  Some poor folding bikes are difficult to fold and unfold, and they take up a lot of space, even when folded. They may also have poor-quality hinges that are difficult to tighten or untighten, and can be prone to wear and tear or even rust.

With some electric bikes, the motor support doesn’t kick in until you’ve already completed a few pedal revolutions. This makes it difficult to start cycling on a hill or when pushing off from traffic lights. The best electric bikes have pedal sensors and you feel the power of the motor almost instantly.  In our folding electric bike reviews, we’ll also tell you how comfortable the bike is to ride on rough terrain, such as gravel or cobbles, and how smoothly the motor delivers power while you ride, including when taking corners. This can be tough for e-bikes, resulting in a jerky riding experience.

Most folding electric bikes will have a digital display on the handlebars that will show you your speed, distance travelled and allow you to change the assistance setting. But some folders we’ve tested don’t have these displays and are either controlled by your phone via an app, or through buttons on the battery. Make sure your you buy a bike that will suit your lifestyle and riding style.

If you’re a particularly tall rider, you will want to check that the seatpost will extend high enough, and the handlebars have enough reach so that you aren’t hunched over the pedals, giving you an inefficient and uncomfortable riding position.

Try and make sure you get a bike with a removable battery. If the battery is easily removable this can make it easier to transport, as you can remove a lot of the weight on the bike by taking the battery off and carrying it separately.

If the battery is built into the frame and you can’t remove it, then you can’t remove it for storage, charging or necessarily easily replace it. With most lithium-ion batteries only guaranteed for a couple of years, this could limit the life of your bike.

Folding bikes vs regular e-bikes It’s worth considering whether you could get more for your money if you opt for a regular electric bike that doesn’t fold.  While you won’t be able to take it on a train in rush hour or put it in a car, we’ve found some good cheaper options.

They can still be transported on a bike rack or on a train if outside of rush hour, although bear in mind that they can be very heavy.

Our verdict on folding electric bikes

The best folding electric bikes will unlock a happier commute, or allow you to own a bike again if space for storage is an issue for you. They should be relatively light, offer a great ride and be built with quality components. Folding and carrying the bike should also be a doddle. 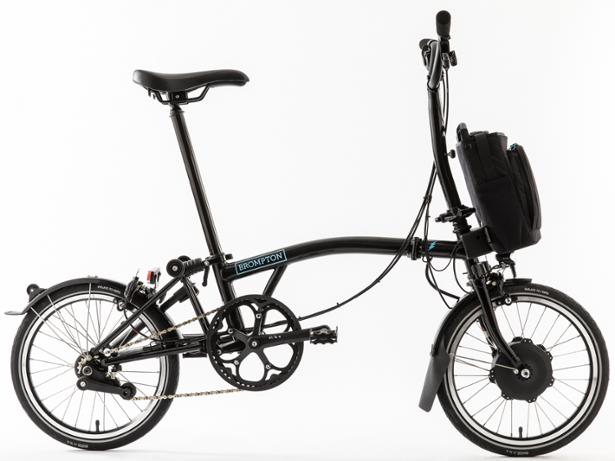 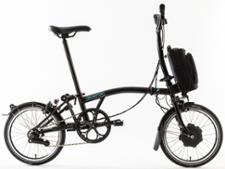 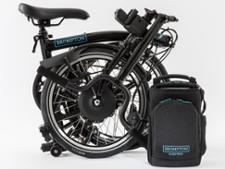 This is a fantastic folding electric bike. It’s really well built, is practical for commuters and is nice to ride too. Bromptons are stalwarts of the folding bike world, and this electric version earns a top recommendation from us. Our only gripe is that it’s not easy to change the assistance level as you ride.