Raised garden beds: how to build and maintain 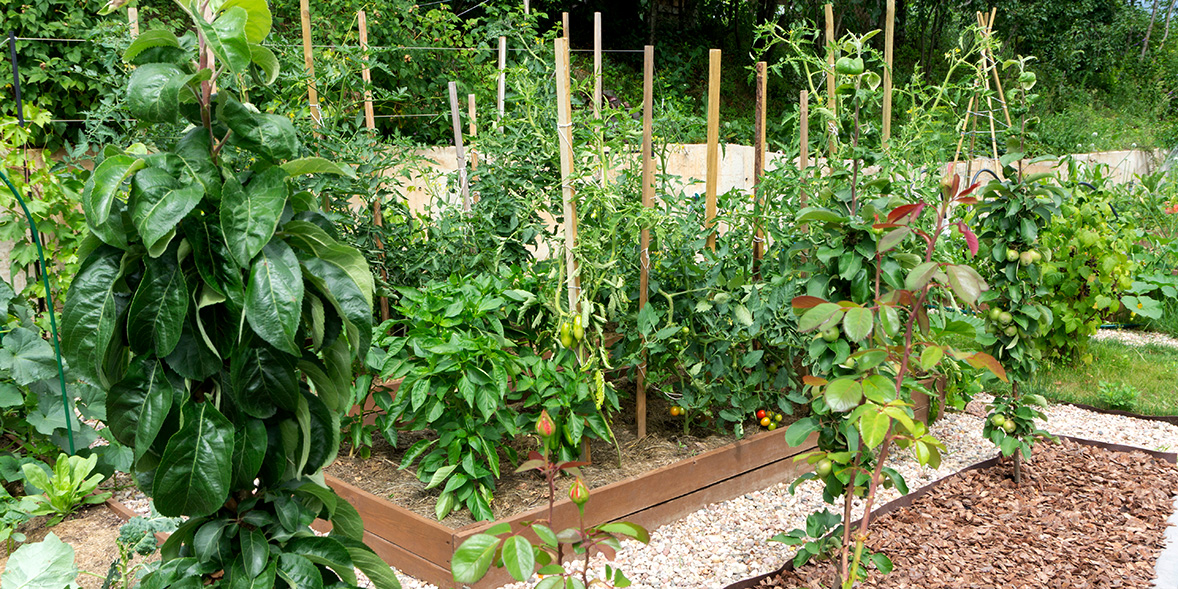 Raised beds allow you to improve your garden soil, or even grow crops where there’s no soil at all.  Most people use wooded-sided beds, but you can create a raised bed by just putting a thick layer of garden compost on the soil and topping it up every autumn.

The advantages of raised beds

The main advantage is that when your soil is poor that extra 15cm of soil that the raised beds provide makes all the difference, particularly as it’s topped up with organic matter, such as spent mushroom compost regularly. The surface dries out and warms up quicker in spring, so you can also get ahead with early sowings. The growing areas are differentiated from the paths, so the soil in the beds remains loose and easy to plant into. The paths can be mulched with wood chips and kept weeded. Most raised beds are no wider than 1.2m as this allows you to reach into the centre of the bed from the sides when planting, weeding, watering and harvesting so you don’t ever need to tread on the beds. This width is also easy for you to protect from insects with fine mesh or from cold with fleece. 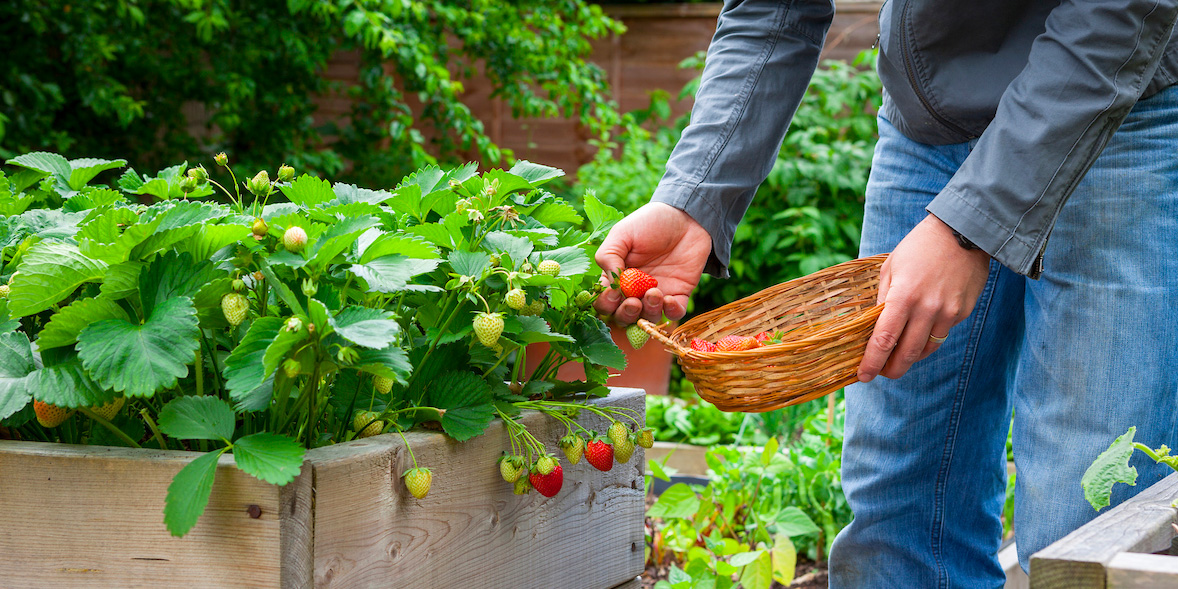 You can buy ready-made raised beds, but if you want to save money, you can build your own bed.

Pros of sleepers: The 1.2m slimline sleepers we used cost just £7.49 each from a local builders’ merchants.  As they were already sold in the length we required, we didn’t need to cut them down to size.  They were solid enough to screw together without needing a corner post. This reduced the installation time. The sleepers were easy to screw together and created a solid bed with a good depth of soil to plant in to.  The construction was solid and the sleepers showed no signs of rot, warping or soil seepage, even after 18 months.  The yield of crops was satisfactory.

Cons of sleepers: You’ll need a long drill bit to create the pilot holes to screw together the sleepers.  Wood thickness means the bed  takes up slightly more space and also reduces the internal planting area.  The bed retained moisture well, but made the soil a bit wet and heavy to dig in spring.  Delivery charges for sleepers can be high.

Verdict: A simple way to create a long-lasting and attractive raised bed.

Pros of scaffold boards: The long length of a standard scaffold board meant that we only had to buy two to cut down for the size of our beds.  At 23cm-wide, they were also bigger than most of the other boards we tried. This gave the bed a good depth of soil to plant in to.  The bed looked strong, and when first built it gave the impression it would last for years.  The planks faded a bit in the18 months they were outside, but the only sign of deterioration was a bit of movement away from the fence post in one corner. This bed gave the best yield of vegetables, particularly potatoes.

​Cons of scaffold boards: The scaffold boards were among the heaviest to work with.  The reinforcing metal strips taped around the plank ends reduced the visual appeal of the otherwise chunky and robust-looking beds.  The long length of the boards makes them difficult to get home in a car, so you may need to pay to have them delivered.

Verdict: Robust and a good choice if you prefer a slightly deeper raised bed.

Tips for making a raised bed 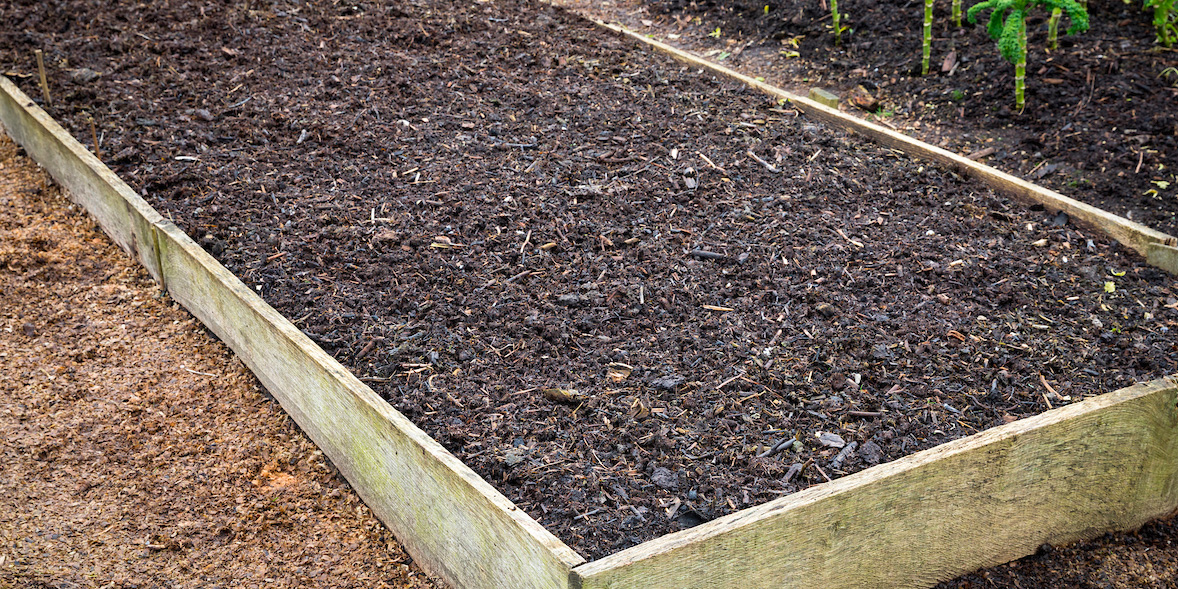 Although 15cm is typically considered a reasonable height for a raised bed, you might prefer to build out of a slightly wider plank, which will give you a bit more depth of soil. Strong corners helped to keep our beds in good condition – use 10 x 10cmfence posts rather than thinner battens to build a strong structure that will last. Use screws rather than nails to build your bed. Nails will pull away from the corner posts more easily. Restrict the width of your bed to 1.2m to ensure that you can easily reach the plants in its centre without having to stand in the bed. None of the prices for our beds include the cost of delivery for materials. This ranged from £7.50 to £55, so is worth factoring into the cost of your project if you can’t collect the materials yourself.

What to fill raised beds with

Choose the wrong filling and you can end up with a bed that’s saturated in wet weather and slumps to create a compressed, airless mass with a hard crust that’s tricky to dig, or a mix that is so free-draining that your plants become parched in dry weather. Which? Gardening magazine trialled different soil mixes to find the best recipe.

25% topsoil; 50% composted manure; 25% grit and sand This mix excelled in most areas, giving us the biggest and healthiest-looking plants and best yields of potatoes and baby carrots.  Although the mix was quite heavy to put in the bed, it did not settle much and was very easy to dig.  It was easy to weed by hand without leaving roots behind. Soil fertility was good, and the pH around neutral.  The amount of moisture in the mix was well balanced, and it also had the warmest soil temperature – on average 1.5°C warmer than the ground temperature in the early part of the year

A soil mix worth considering

They settled the least between autumn and spring, and the soil was on average 1.3°C warmer than the ground.  The mix also had a more neutral pH of 7.4than soil-only, and was just a little low in phosphorus when we tested it in the autumn.  The beds were easy to dig and weed, but could be drier than our best mix.  The yield of carrots was average, but the yield of potatoes was good. The worst soil mix 100% topsoil The beds filled with topsoil were a pain, as we needed a massive 2,005kg to fill them.

The average soil temperature was barely warmer than the ground, and it became so wet and heavy during the soggy spring that we had to delay planting our potatoes until it was workable.

Weeds snapped off when pulled, leaving their roots behind.  Soil fertility tests in autumn revealed that the soil had an alkaline pH of 7.9 and was lacking in nitrogen, phosphorus and potassium.

Despite adding NPK fertiliser in spring, the plants looked smaller and paler in these beds and produced the lowest yield of potatoes and carrots.